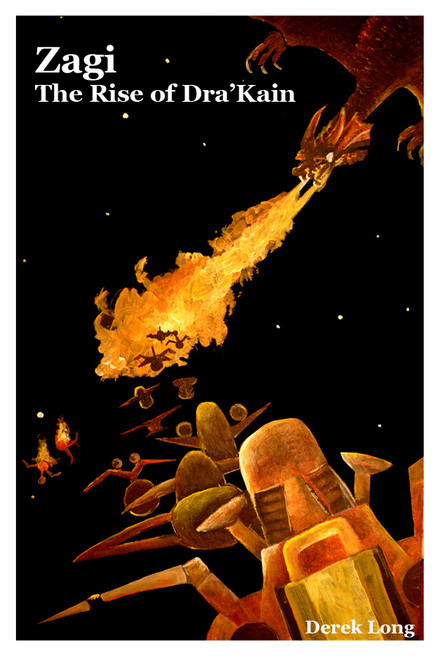 472 A.D. Britains greatest king Arthur Pendragon is dead, killed by his evil nephew, Modred, and Merzail, the son of the wizard Merlin, prays in desperation for help. His kind, the wizards who served Arthur loyally and protected Britain during his reign, have been declared heretics by the leaders of the emerging faith, Christianity, and are being hunted down and killed by their armies. His prayer is answered by the Lady of the Lake, the keeper of the sword Excalibur. She gives him the sword and commands him to lead his people in a new world to which she will send them. In their new home, they take a new name for themselves: Zagi.

After ruling an empire spanning a galaxy for 3,000 years, the Zagi are overthrown by a demon called Armeggon, and their salvation rests with DraKain, the leader of an army of elite warriors, whose massive starship the Thermopylae is the one weapon that can defeat their enemy. His quest to destroy Armeggon will lead him to discover vast magical powers within himself and his birthright as the true emperor of the Zagi.

Derek Long lives in Des Moines, Iowa and graduated from Grand View University in 2007 with a bachelors degree in journalism. He loves science fiction and fantasy books and movies like Star Wars, The Lord of the Rings, and Dune. Despite being born with cerebral palsy, which effects his muscles and requires him to walk with forearm crutches, he has earned a 2nd degree black belt in Tae Kwon Do. Derek has always enjoyed music, and has sang, played the trumpet for much of his life, and also plays the guitar.

Rise Above It All

The Rise of the Moon

Son Rise in the Morning

You're Never Going to Believe This One

Zion Is an Outcast

Your Passport to Immigration

Your First 30 Minutes - The ABC's of Successful Classroom Management - eBook